If you look closely, these designs are variations of certain pattern combinations. 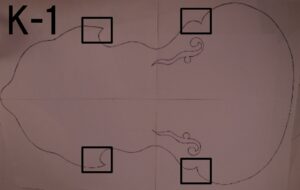 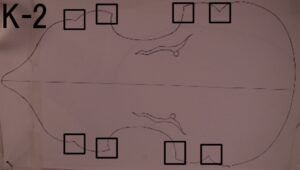 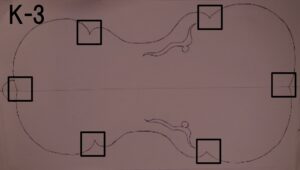 This design is determined by combination of convexes and the phonogram curve connecting them. It is the same even if you think that the intersection of two dissonant phonogram curves is convex.

K-2 has four negative dents in all. Examining the isophonic lines from the outside to the inside reveals that the surfaces separate at the depressions.
In the case of K-2, it is separated into three drums. The situation is the same as the K-1, and the whole and parts cannot be fused, resulting in an instrument with a lot of split vibration (noise component).

Next, we will investigate K-3.
It still separates at the negative depression. I tried to redesign it to the tip of dent hits to the center, to avoid separating the shape, but it didn’t work, instead, it separated clearly. 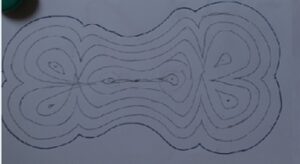 Let’s change the idea a little here. Ignore the outline design and try to create a virtual unified resonance plate inside. 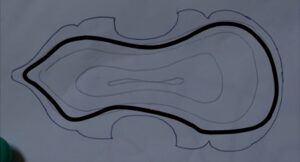 If I construct an equal-tempered line inside this thick frame, the instrument’s phonogram will have a single fixed point (dantian of this instrument ). I think that the part outside the thick frame is not very meaningful acoustically (rather, it is a source of noise). It was a compromise, but it turned out to be a plump instrument, and I managed to unify the fixed points (Dantian).
I actually carved it to this effect. 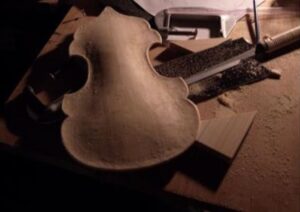 The K-1 started carving from the periphery, so it became thin. The K-2 is plump because the resonance is expanded from the virtual thick frame part. But how should we expand the resonance with the outside of the thick frame?

After all, we can’t make a fusion of whole and part with this outline. The same is true for K-3. K-2 also stopped making here. How can we fuse the part and the whole?

Was it inevitable that the model was changed repeatedly through various ancient instruments and finally converged on the violin design?
Was there any reason, both acoustically and decoratively? 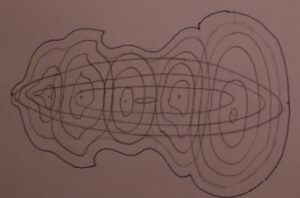 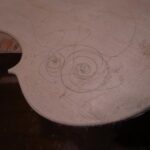 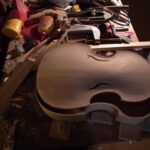 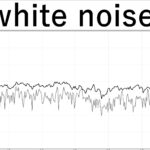 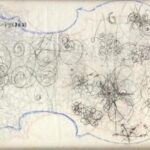